Did you know what the oldest sporting trophy is that was first contested in 1851? 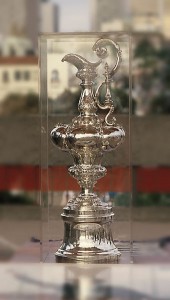 The Cup itself is an ornate silver-plated Britannia metal bottomless ewer, crafted in 1848 by Garrard & Co. The trophy is inscribed with names of the yachts that competed in the regatta’s matches. Bases matching the silver cup were added in 1958 and 2003 to accommodate more names. The cup is one of three or six that were made as off-the-shelf trophies. Sir Henry Paget, the Marquess of Anglesey bought one and donated it for the Royal Yacht Squadron’s 1851 Annual Regatta around the Isle of Wight. It was originally known by the Squadron as the “Royal Yacht Squadron Cup” or the “RYS Cup for One Hundred Sovereigns”. The Cup subsequently became known as the “One Hundred Guinea(s) Cup”, by the American syndicate that won it. As time went by, the Cup was also referred to as the “Queen’s Cup”, the “America Cup”, and the “America’s Cup”. Today, the trophy is officially known as the America’s Cup and affectionately called the “Auld Mug” by the sailing community.

The regatta’s origins date back to August 22, 1851 when the 30.86 m schooner-yacht America, owned by a syndicate that represented the New York Yacht Club, raced 15 yachts representing the Royal Yacht Squadron around the Isle of Wight. America won by 20 minutes. Apocryphally, Queen Victoria asked who was second; the answer famously was: “There is no second, your Majesty.”

Volunteer turning Sandy Hook Lightship on Sept. 27, 1887 during the seventh America’s Cup.The surviving members of the syndicate which owned the America donated the Cup through a Deed of Gift (written in 1852) to the New York Yacht Club on July 8, 1857. The trophy would be held in trust as a “challenge” trophy to promote friendly competition among nations.

Stung by this blow to contemporary perceptions of invincible British sea power, a succession of British syndicates attempted to win back the cup, but the New York Yacht Club remained unbeaten for 25 challenges over 113 years, the longest winning streak in the history of sport. Matches were held in the vicinity of New York City from 1870 and 1920, which includes the “Herreshoff Period” between 1893 and 1920, when cup defenders were designed by Nathanael Herreshoff. From 1930 to 1983, the races were sailed off Newport, Rhode Island for the rest of the NYYC’s reign.
The America’s Cup is the most famous and most prestigious regatta and Match Race in the sport of sailing, and the oldest active trophy in international sport, predating the Modern Olympics by 45 years. The sport attracts top sailors and yacht designers because of its long history and prestige as the “Holy Grail” of yachting. Although the most salient aspect of the regatta is its yacht races, it is also a test of boat design, sail design, fundraising, and management skills. The cup, originally offered as the Royal Yacht Squadron cup, is now named after the first yacht to win the trophy, the schooner America. The trophy remained in the hands of the New York Yacht Club of the United States from 1852 or 1857 (when the syndicate that won the Cup donated the trophy to the club) until 1983 when the Cup was won by the challenger, Australia II of Australia, ending the longest winning streak in the history of sport. The skipper of Australia II, John Bertrand, was quoted in saying, “This puts yacht racing back on the map!”

The America’s Cup regatta is a challenge-driven yacht series that currently involves a best-of-nine series of match racing (a duel between two boats). Since the 1992 match, the regatta has been sailed with the International America’s Cup Class (IACC) sloop, a monohull class. Boats that conform to the IACC rules typically have a length of about 75 feet (23 m). Any challenger who meets the requirements specified in the Deed of Gift, which governs the regatta, has the right to challenge the yacht club that holds the Cup. Since 1983, Louis Vuitton has sponsored the Louis Vuitton Cup as a prize for the winner of the challenger selection series (which was inaugurated for the 1970 match). The America’s Cup is a race between the winner of the Louis Vuitton Cup and the current holder. If the challenging team wins the cup, the cup’s ownership is transferred from the defender’s yacht club to the winning team’s yacht club