Celebrating the Malcolm Baldridge National Quality Award’s 20th anniversary this past week, on November 20th in Washington, D.C., President George W. Bush and Commerce Secretary Carlos M. Gutierrez announced that five organizations were the recipients of the 2007 Malcolm Baldrige National Quality Award, the nation’s highest Presidential honor for organizational performance excellence. For the first time in the history of the Baldrige Award, nonprofit organizations have been selected. 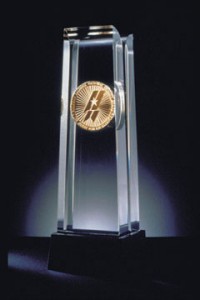 The Trophy
The Award crystal is composed of two solid Steuben Crystal prismatic forms, that stands 14 inches tall. The crystal is held in a base of black anodized aluminum, with the award recipient’s name engraved on the base. A 22-karat gold-plated medallion is captured in the front section of the crystal. The medal bears the inscription “Malcolm Baldridge National Quality Award” and “The Quest For Excellence” surrounding the Baldrige “Ribbon with Star” Logo on one side and the “Presidential Seal” on the other side.

Why was the award established?
In the early and mid-1980s, many industry and government leaders saw that a renewed emphasis on quality was no longer an option for American companies but a necessity for doing business in an ever expanding, and more demanding, competitive world market. But many American businesses either did not believe quality mattered for them or did not know where to begin. The Baldrige Award was envisioned as a standard of excellence that would help U.S. organizations achieve world-class quality.

The Baldrige program is managed by the National Institute of Standards and Technology (NIST) in conjunction with the private sector. As a nonregulatory agency of the Commerce Department, NIST promotes U.S. innovation and industrial competitiveness by advancing measurement science, standards and technology in ways that enhance economic security and improve our quality of life.

The Findings and Purposes Section of Public Law 100-107 states that:”
1. the leadership of the United States in product and process quality has been challenged strongly (and sometimes successfully) by foreign competition, and our Nation’s productivity growth has improved less than our competitors’ over the last two decades.
2. American business and industry are beginning to understand that poor quality costs companies as much as 20 percent of sales revenues nationally and that improved quality of goods and services goes hand in hand with improved productivity, lower costs, and increased profitability.
3. strategic planning for quality and quality improvement programs, through a commitment to excellence in manufacturing and services, are becoming more and more essential to the well-being of our Nation’s economy and our ability to compete effectively in the global marketplace.
4. improved management understanding of the factory floor, worker involvement in quality, and greater emphasis on statistical process control can lead to dramatic improvements in the cost and quality of manufactured products.
5. the concept of quality improvement is directly applicable to small companies as well as large, to service industries as well as manufacturing, and to the public sector as well as private enterprise.
6. in order to be successful, quality improvement programs must be management-led and customer-oriented, and this may require fundamental changes in the way companies and agencies do business.
7. several major industrial nations have successfully coupled rigorous private-sector quality audits with national awards giving special recognition to those enterprises the audits identify as the very best; and
8. a national quality award program of this kind in the United States would help improve quality and productivity by:
a. helping to stimulate American companies to improve quality and productivity for the pride of recognition while obtaining a competitive edge through increased profits;
b. recognizing the achievements of those companies that improve the quality of their goods and services and providing an example to others;
c. establishing guidelines and criteria that can be used by business, industrial, governmental, and other organizations in evaluating their own quality improvement efforts; and
d. providing specific guidance for other American organizations that wish to learn how to manage for high quality by making available detailed information on how winning organizations were able to change their cultures and achieve eminence.”

The 2007 Baldrige Award recipients—listed with their category—are:
• PRO-TEC Coating Co., Leipsic, Ohio (small business)
• Mercy Health System, Janesville, Wisc. (health care)
• Sharp HealthCare, San Diego, Calif. (health care)
• City of Coral Springs, Coral Springs, Fla. (nonprofit)
• U.S. Army Armament Research, Development and Engineering Center (ARDEC), Picatinny Arsenal, N.J. (nonprofit)
“I am pleased to join President Bush in congratulating the five outstanding organizations that have been named to receive this year’s Baldrige Award,” said Secretary Gutierrez. “The organizations we recognize today have given us superb examples of innovation, excellence and world-class performance. They serve as role models for organizations of all kinds striving to improve effectiveness and increase value to their customers.”
With these new recipients, the program celebrates its 20th anniversary. Along with recognizing the achievements of the award recipients, a key measure of the Baldrige National Quality Program’s impact has been the widespread use of its Criteria for Performance Excellence, the guide designed to help organizations of all types improve their operations. Since 1987, about 10 million copies of the Baldrige criteria have been distributed. Downloads currently number about 1 million annually. Additionally, more than 40 U.S. states and more than 45 countries worldwide have implemented programs based on the Baldrige criteria.
The 2007 Baldrige Award recipients were selected from a field of 84 applicants. All of the applicants were evaluated rigorously by an independent board of examiners in seven areas: leadership; strategic planning; customer and market focus; measurement, analysis and knowledge management; workforce focus; process management; and results. The evaluation process for the 2007 Baldrige Award recipients included about 1,000 hours of review and an on-site visit by teams of examiners to clarify questions and verify information in the applications.
The 2007 Baldrige Award recipients are expected to be presented with their awards in a ceremony in Washington, D.C., early next year.