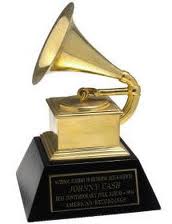 If you are anything like me the Grammys are about sitting around with friends to watch over the top performances (remember Pinks acrobatics in 2012?), gawk over the gorgeous gowns you could never afford, and make fun of the obnoxious gowns you would never want to afford (not going to lie – this is my favorite part of the whole night).

However, I’ve never really thought about how the winners are decided, they just happen. There is actually a fairly long process that goes into this decision and unlike American Idol and VMA’s we get no say. Grammy nominations are decided by The National Academy of Recording Arts and Sciences(NARAS).

NARAS was formed in 1957 and consists of musicians, producers, recording engineers and various other reordering professionals. Since 1959  have been best known for the Grammy Awards or “Gramophone Awards” as it was originally called; named after the trophy which is a small golden gramophone.(old fashioned but a golden i-pod would probably looks silly)

The Grammys always acknowledge achievements from the year prior- so the 2013 Grammys are for albums that came out in 2012. Nominations are made by record companies and individuals online with a physical copy of the work to be sent in to the NARAS.

One hundred and fifty music experts are appointed with the task of going through the nominations for all 81 categories and deciding if it meets the criteria for the category it has been nominated for. This list is then sent out to all NARAS members to vote on.

All members vote within the general fields (not restricted by genera):

They then choose 9 out of the 29 other fields to vote in.(ex: Pop , Latin, Gospel)  The top five nominees from each category become the Grammy Nominees that get announced to the world……. the process is still not over!!

The top five are voted on by all Recording Academy Members who again vote in the general categories and then choose 8 out of the 30 fields (preferable ones they have experience in).

Votes are counted and Winners are announced live at the Grammys. Though I don’t always agree with the winners chosen; for the Artist it’s an accomplishment that is recognized by their peers and not just their fans. And no nominee walks away empty handed, for those who do not win the Gramophone Award, there is a medal given out(see below)- the design for which has varied over the years.

So tune in February 10th 8pm EST to see what Gaga wears next, watch Elton John perform with Ed Sheeran, and find out who the Academy has deemed the best of 2012.

If you want to learn more about how the Grammy itself is made click here:  http://blog.gospikes.com/?p=160