As everybody in the country knows by now, the Philadelphia Eagles are the reigning Super Bowl Champions.  While a couple of months have passed since the big victory parade, the city of Philadelphia and Eagles fans are still enjoying the win as if it happened yesterday.

It seems that almost anywhere you go in the Delaware Valley, you’ll find someone wearing their Eagles gear. From Super Bowl Champion hats, shirts, hoodies, and everything else under the sun, it’s safe to say the sports fans in this area know how to represent and treat their champions. 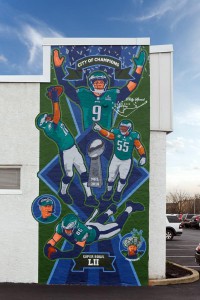 Here at Spike’s Trophies, we are more than just the best PA trophy supplier. We now will be showcasing an incredible mural depicting the Philadelphia Eagles Super Bowl victory.

With the mural dedication happening on Tuesday, May 8, former Eagles safety Brian Dawkins is planned to be in attendance, along with other big-time names like Bill Bergey, Merrill Reese and sportswriter Ray Didinger. Relive the Eagles Super Bowl victory with this mural which showcases:

After the loss of starting quarterback Carson Wentz, the season fell into the lap of the backup QB and former Eagle Nick Foles. While many in the media doubted if the Eagles were contenders with all of their injuries, Foles showed that he was cool, calm and collected while leading the underdog Eagles on a playoff run for the ages.

Doug Pederson and the “Philly Special”

In what turned out to be one of the biggest plays of the game, the risky “Philly Special” play call can be seen in x’s and o’s form on this Super Bowl mural. The fearless Doug Pederson and his also iconic visor look on in this mural.

You can instantly remember the huge Alshon Jeffery touchdown or Zach Ertz’s game-winning touchdown catch on our Super Bowl mural. Who could forget the timely strip-sack of Tom Brady by Brandon Graham? Our mural certainly remembers.

Center Jason Kelce solidified himself not as just an Eagles legend but also a Philadelphia legend. Our mural relives Kelce’s historic victory speech while donning full Mummer’s regalia. By calling out the NFL media and all the naysayers of the team, Kelce spoke the words that this starved fan base had kept in for too long.

As you make your way to Spike’s Trophies to pick up the best swimming trophies in PA, be sure to visit this memorable mural dedicated to the Super Bowl Champion Philadelphia Eagles! For more information about our mural unveiling ceremony or our many products, contact us today!