On Tuesday, May 8th, we had the official unveiling of the Philadelphia Eagles Super Bowl LII Champions Mural located on the side of our building.  The weather was perfect and loyal Eagles fans, like always, showed up in force for the event.

News stations from the major local outlets lined up their cameras to get footage while men, women and children wearing their favorite Eagles gear looked on.

Leading off the event was Keith Baldwin, the President of Spike’s Trophies. After addressing the crowd of diehard Eagles fans, the podium was then held by many other speakers including President of the Philadelphia Sports Hall of Fame, Ken Avallon, Jane Golden from the Philadelphia Mural Arts Program, painter of the mural David McShane, and Rep. Ed Neilson of the PA House of Representatives.

Rep. Neilson rallied up the crowd by leading them in a passionate E-A-G-L-E-S chant. And it shouldn’t come as a surprise to anyone in the Philadelphia area that this wouldn’t be the last time this Eagles chant would be held that day.

The official ribbon cutting, in typical Philadelphia fashion, was started off by former Eagle great Bill Bergey leading the chant with all of those in attendance. And just like that, the Philadelphia Eagles Super Bowl LII Champions Mural was open to the public.

If there is one man who understands the Eagles more than anyone, it’s sportswriter and Pro Football Hall of Fame member, Ray Didinger.

“It’s a great representation of a lifetime of following this football team,” commented Didinger. “Having experienced being at the game in 1960 when they won, and this half a century of chasing it down again, to actually see it happen and be there, this mural gives it a sort of permanence. This is always going to be here.” 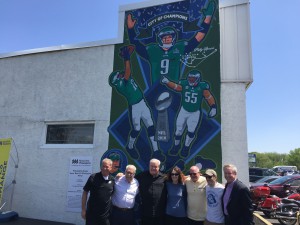 What makes Spike’s Trophies the best PA trophy shop is that we are more than just a manufacturer. We provide our customers with an experience that will bring them back to some of their fondest memories. With this new Eagles mural complementing our City of Champions mural on the other side of our facility, our location is a must-see for any Philly sports fan.

You can check out this inspiring and memorable mural by visiting our facility located at 2701 Grant Avenue in Philadelphia, PA, and you can even place your order for swimming trophies in PA on our website.