The Larry O’Brien Trophy is a Silver and Vermeil Statue – Basketball on Plinth. Vermeil (pronounced vehr-MAY), is also known as silver gilt, is a combination of sterling silver, gold, and other precious metals. A Plinth in architecture is the platform or base upon which a column, pedestal, statue, monument, or structure rests. The trophy is approximately sixteen pounds and stands about two feet tall and valued at $13,500.  It is designed to look like a basketball about to enter a basketball net. The basketball itself is the same size as a regulation size NBA basketball. 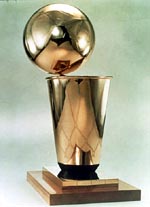 A new Larry O’Brien Trophy is made every year, unlike the Stanley Cup, and the winning team maintains permanent possession of that trophy. The trophy is engraved with the year and team name, and the trophies are often prominently displayed in the team’s arena. Originally this trophy was called the Walter A. Brown Trophy after the league pioneer and Boston Celtic owner. An earlier NBA Championship bowl also was named after Brown.

Lawrence (Larry) O’Brien, a member of Former President Lyndon B. Johnson’s cabinet as U.S. Postmaster General, became the commissioner of the National Basketball Association in 1975. O’Brien was a vital carpenter of the NBA, building basketball interest among fans. Attendance doubled and television revenue tripled during his tenure, while the most recent broadcast of the 2005 NBA Finals reached 205 countries. In 1984, the sport’s annual championship trophy was renamed in his honor of his “Everyday Greatness”.

To learn a little more about Larry O’Brien’s distinquished career in politics, government and the NBA please click here