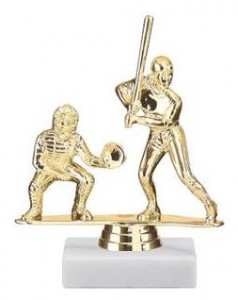 Players are reporting to Major League baseball camps throughout the Grapefruit and Cactus Leagues, and when it’s Spring Training time in the City of Brotherly Love, we at Spike’s Trophies don’t just get excited about our hometown Phillies and what they’re going to look like in the new season. For the record, we do get excited about our Phillies, even if they were under .500 and finished in the middle of the division standings the year before. But as it relates to you and what you mean to our business, selling awesome trophies and crystal awards in Philadelphia, springtime makes us excited about…rec-league softball!

Even though the air is still cold and the forecast could call for snow at any time, it’s fun to think about the smell of glove leather and infield dirt wafting through the air across our region. It’s never too early to think about that – unless it’s Super Bowl Sunday and the Eagles are playing (maybe next year!).

Philly is a great city for weekend warriors. We have boundless opportunities for armchair quarterbacks to become actual quarterbacks and former high school or college softball and baseball players to show they’ve still got it, even if they’ve put on a few pounds or gained a few gray hairs since their glory days.

If you’ve ever taken part in one of the many recreational leagues, from softball to kickball to flag football, you know that “just for fun” stuff can get really competitive. The way some people attack the ball and, let’s face it, sometimes their competitors, you’d never know they weren’t getting paid to play.

We love that stuff!

Spike’s makes trophies, as you know, and we have a great catalog of softball awards for your rec league or team. They’re great for end-of-season accolades to give out to league champs, team MVPs, Most Improved Players. Most Intense? Hey, we’re just throwing out some ideas!

These aren’t “participant trophies,” by the way. As a leading source for crystal awards in Pennsylvania, we’ve got some really eye-catching options.

Offering a free t-shirt to all your players is nice, but why not add extra incentive to the season by dangling a shiny “major award” in front of them before they hit the field? Contact Spike’s today to place an order, and let’s Play Ball!