In doing research for this blog of Famous Awards I have come across a number of fun, somewhat obscure, facts concerning these famous awards. I would like to share a few with you. Following are just a few. I’ll post more in the coming months as I come across them in my research. Did you know…

… in ancient Greece, the first “Trophies” consisted of captured arms and standards hung upon a tree or stake in the semblance of a man and was inscribed with details of the battle along with a dedication to a god or gods.  After a naval victory, the “trophy”, composed of whole ships or their beaks, were laid out on the nearest beach.  To destroy a trophy was regarded as a sacrilege , it must be left to decay naturally.)…since, it was considered an object dedicated to a god (for more see posting on History of the word Trophy in Recognition: Info & Fun Facts

…. that 10 entertainers have scored the showbiz “grand slam” of winning famous awards by winning the Oscar, Tony, Grammy and Emmy?  Can you name the 10 entertainers who achieved such a distinction?  They are Mel Brooks, John Gielgud, Whoopi Goldberg, Marvin Hamlisch, Helen Hayes, Audrey Hepburn, Rita Moreno, Mike Nichols, Richard Rogers, and musical orchestrator Jonathan Tunick. (for more see posting on the Oscar, Tony, Grammy, and Emmy in Famous Awards)

… which of the four National Medal of Honors were the first to be created by the armed forces?  Was it the Army, Navy, Marine Corps or Coast Guard?  The Navy medal was the first to be struck, followed quickly by the Army version of this award. There are three different types of Medals of Honor today.  The original simple star shape established in 1861 which the Navy, Marine Corps and Coast Guard have retained; a wreath version designed in 1904 for the Army; and an altered wreath version for the Air Force, designed in 1963 and adopted in 1965. (for more see posting on The Medal of Honor in Famous Awards – The Medal of Honor)

… that The Claret Jug, or to use its proper name, The Golf Champion Trophy, presented to each year’s winner of The Open Championship was not the original prize for this championship?  When the Championship began at Prestwick Golf Club in Scotland in 1860, the winner was presented with the Challenge Belt, made of rich morocco leather, embellished with a silver buckle and emblems.  It wasn’t until 1872 that the “Jug” replaced the Champion’s Belt. (for more see posting on The Claret Jug in Famous Awards – The Claret Jug)

… that the most Super Bowl rings won to date is Seven, won by Neal Dahlen. Mr. Dahlen won five with the 49ers (Staff and Player Personnel) and two with the Denver Broncos (General Manager). The second most is Six, won by Conditioning coach Mike Woicik. Mike won three with the Dallas Cowboys and three with the New England Patriots. Bill Belichick currently has five and with the next win allowing him to join this elite group.

Tonight the 50th Annual Grammy Awards will be presented by the National Academy of Recording Arts and Sciences of the United States for outstanding achievements in the record industry. The Grammy Awards were initially called the Gramophone Awards, which became shortened to its current name “Grammy” over time. 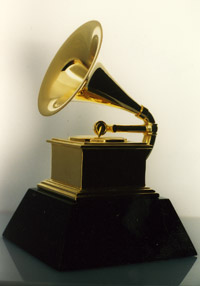 And why is a Grammy called a ”grammy”? Because the trophy is …

… a gilded likeness of a very old-fashioned record player called a gramophone (see history of “real” gramophone below).

The Recording Academy honors excellence in the recording arts and sciences. It is truly a peer honor, awarded by and to artists and technical professionals for artistic or technical achievement, not sales or chart positions. In addition to the GRAMMY Awards, The Recording Academy presents other notable honors. These awards recognize contributions and activities of significance to the recording field that fall outside the framework of the GRAMMY Awards categories, and include the Lifetime Achievement Award, the Trustees Award, the Technical GRAMMY Award, the GRAMMY Legend Award and GRAMMY Hall Of Fame Award. The awards ceremony features performances by prominent artists, and some of the more prominent Grammy Awards are presented in a widely-viewed televised ceremony every February. The Grammys are considered the highest music honor, the U.S. record industry’s equivalent to the Academy Awards / Oscars. Prior to the first live Grammys telecast in 1971, a series of taped annual specials in the 1960s called The Best on Record were broadcast.

The GRAMMY Award Trophy
The actual Grammy trophy is manufactured exclusively in Ridgeway, CO. The trophies are all hand made and assembled. In 1990, the old smaller gramophone, which had existed since 1958, had to be revamped because the metals were too soft and there were many problems with the trophy breaking. The tone arm on the original Grammy award had a long tradition of breaking, either in the shipping or even by holding it the wrong way. So the new design required the tone arm to be “beefed up”, while keeping it streamline. The current trophy was made bigger and grander. The academy requested that the new Grammy be about 30 percent larger than the original award.

The Gramophone cabinet (below tone arm) was redesigned entirely out of sheet brass cut out on a band saw. A master mold maker made the molds, which are sand cast from bronze, for the first updated Grammy. The mold for the cabinet is a six-piece mold and the tone arm is a five-piece mold. Molds for casting are made, so the awards can be reproduced in quantity. The Grammy is made of 4 major components: The Base; The Cabinet; The Tone Arm; And The Bell. The Bell is manufactured separately in a Metal Spinning plant in California. The Grammy is assembled in pieces and finally finished off in gold plating. The initial molds used in 1990 are being used today and if treated right they should last another 20 years.

The GRAMMY is cast in a metal allow. Originally the Grammy’s were cast in lead. Lead was used in the 1950’s in all trophies because it was easy to cast and because it was easy to polish and finish. The problem with lead is that it is soft and breaks easily. An alloy of zinc and aluminum was decided upon, producing a custom alloy that the manufacturer calls “Gramium”. After being filed, ground and polished they are electroplated first in copper, then nickel plated, and finally they are plated in 24K gold. The old Grammy award sat on a walnut base. The updated new Grammy is placed upon a black lacquer solid wood base.

Like most of the famous awards in my blog, every one who sees one, wants to hold it! While gold will not tarnish it can become dull after being handled a lot. The gold can actually be rubbed of if it is rubbed too much. So, the manufacturer does not recommend frequent cleaning. The best method of cleaning a Grammy, as recommended by the manufacturer, is to use mild dish soap with a soft cotton cloth which will clean off finger prints. Rinse in clear warm water, then wipe it dry and you will bring your Grammy back the luster of brand new. Oh, and before I forget – ALWAYS hold your GRAMMY by the tone arm and BE CAREFUL not to get the felt bottom wet, it could get ugly !

The trophies used for the broadcast are called “stunt” Grammys. The actual awards are kept at the manufacturers until after the winners are announced. At that time the manufacturer engraves the awards with the winner’s names and personally, drives them across country to personally deliver them to the academy.

Grammy Award Winner Trivia:
Who has won the Most Grammys in a lifetime? The record for the most Grammy Awards in a lifetime is held by Sir Georg Solti, a Hungarian-British conductor who conducted the Chicago Symphony Orchestra for twenty-two years. He personally won 31 Grammys[2] and is listed for 38 Grammys (6 went to the engineer and 1 to a soloist); he was nominated an additional 74 times before his death in 1997.

What band has received the Most Grammy Awards won by a band? As of 2006, U2 has won more Grammy Awards than any other band with a total of 22 awards.

What solo artist has won the Most Grammy Awards as a male solo artist? Stevie Wonder has won more Grammy Awards than any other artist in popular music with a total of 28[5] This does not include a Grammy Lifetime Achievement Award, which he has also received. Wonder is the only artist to have won Album of the Year awards for three consecutive albums.

What solo female artist has won the Most Grammy Awards as a female solo artist? Alison Krauss, as a solo artist, collaborator, producer and with Union Station has won 20 Grammy Awards, the most ever by a female singer. 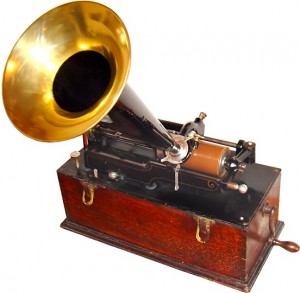 The History of the “real” Gramophone:
A device utilizing a vibrating pen to graphically represent sound on discs of paper, without the idea of playing it back in any manner, was described by Charles Cros of France in 1877, but never built. In 1877, Thomas Edison independently built the first working phonograph, a tinfoil cylinder machine, intending to use it as a voice recording medium, typically for office dictation. The phonograph cylinder dominated the recorded sound market beginning in the 1880s. Lateral-cut disc records were invented by Emile Berliner in 1888 and were used exclusively in toys until 1894, when Berliner began marketing disc records under the Berliner Gramophone label. The Edison “Blue Amberol” cylinder was introduced in 1912, with a longer playing time of around 4 minutes (at 160 rpm) and a more resilient playing surface than its wax predecessor, but the format was doomed due to the difficulty of reproducing recordings. By November 1918 the patents for the manufacture of lateral-cut disc records expired, opening the field for countless companies to produce them, causing disc records to overtake cylinders in popularity. Disc records would dominate the market until they were supplanted by the Compact Disc, starting from the 1980s. Production of Amberol cylinders ceased in the late 1920s.

A gramophone record (also phonograph record, or simply record) is an analogue sound storage medium consisting of a flat disc with an inscribed modulated spiral groove starting near the periphery and ending near the center of the disc. Gramophone records were the primary medium used for commercial music reproduction for most of the 20th century. They replaced the phonograph cylinder as the most popular recording medium in the 1900s, and although they were supplanted in popularity in the late 1980s by digital media, they continue to be manufactured and sold as of 2008. Gramophone records remain the medium of choice for some audiophiles, and specialist areas such as electronica.

Special thanks for contributing information from the following:
http://www.grammy.com/
www.wikipedia.com
http://www.billignsartworks.com/index.php