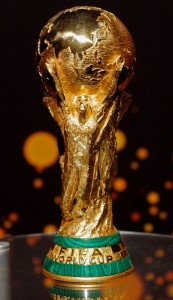 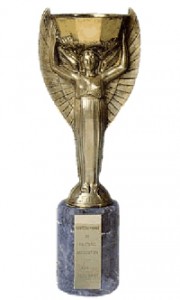 When it comes to eminence and esteem, it doesn’t get any classier than the Wimbledon Championships for the sport of tennis…. 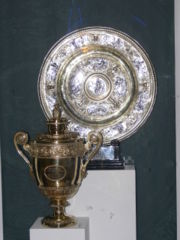 Players from all over the world compete in the only grass court Grand Slam, for the rights to hold the silver gilt trophy and the sterling silver salver.   Since it started in 1877, The Championships, Wimbledon, commonly referred to as simply Wimbledon, is the oldest major championship in the sport of tennis and is widely considered to be the most prestigious.

The Gentlemen’s Singles champion receives a silver gilt cup 18.5 inches (about 47 cm) in height and 7.5 inches (about 19 cm) in diameter. The Cup has a classical style with two handles and a raised foot. The lid is formed with a pineapple on top and a head covered with a winged helmet beneath each handle. There are two decorative borders with floral work and oval styled moldings on the bowl of the Cup and on the handles. Since 1949, all champions have received a miniature replica of the trophy (height 8 ½-inches) to take with them. The trophy has been awarded since 1887 and bears the inscription: “The All England Lawn Tennis Club Single Handed Champion of the World.”

The Ladies’ Singles champion receives a sterling silver salver commonly known as the “Venus Rosewater Dish”, or simply the “Rosewater Dish”. The salver, which is 18.75 inches (about 48 cm) in diameter, is decorated with figures from mythology.  The original 50 guineas ( somewhere close to $150) trophy was made in 1864 by Messrs. Elkington and Co. Ltd of Birmingham and is a copy of an electrotype by Caspar Enderlein from the pewter original in the Louvre.  There is a central design surrounded by four reserves, spread out to the rim.  The remainder of the tray’s surface is decorated with gilt renaissance designs and foliate motifs in relief against a rigid silver ground.  The theme of the decoration is mythological.  The central figure of Temperance, seated on a chest with a lamp in her right hand and a jug in her left, with various attributes such as a sickle, fork and caduceus around her.  The four reserves on the sides of the dish each contain a classical god, together with elements. The reserves around the rim show Minerva presiding over the seven Liberal Arts: Astrology, Geometry, Arithmetic, Music, Rhetoric, Dialectic and Grammar, each with relevant attribute.  The rim of the tray has an oval molding, much like The Cup. And again, beginning in 1949 all champions has received a miniature replica of the trophy (diameter 8 inches) for their personal collection.

The winners of the Gentlemen’s Doubles, Ladies’ Doubles, and Mixed Doubles events receive silver cups. The runner-up in each event receives an inscribed silver plate.  The trophies are usually presented by the President of the All England Club, The Duke of Kent, and by his wife, the Duchess of Kent.

At Wimbledon, more prize money was traditionally awarded in the Gentlemen’s events than in the Ladies’ events. However, as of 2007 prize money is equal at all levels (in part in response to a powerful protest by tennis player Venus Williams).[4] This makes Wimbledon policy identical to that of the Australian Open, US Open, and most recently the French Open.

Held annually between late June and the beginning of July[2] for two weeks (usually ending, at the latest, on the second Sunday of July) at the All England Lawn Tennis and Croquet Club in London, England, the tournament is the third Grand Slam event played each year, preceded by the Australian Open and the French Open, and followed by the U.S. Open.  The tournament duration is subject to extensions for rain.

The Championships were first played under the control of the All England Lawn Tennis and Croquet Club in 1877 at a ground near Worple Road, Wimbledon; the only event held was Gentlemen’s Singles. In 1884, the All England Club added Ladies’ Singles and Gentlemen’s Doubles. Ladies’ Doubles and Mixed Doubles were added in 1913. The Championships moved to their present location, at a ground near Church Road, in 1922. As with the other three Grand Slam events, Wimbledon was contested by top-ranked amateur players until the advent of the open era in tennis in 1968. Britons are very proud of the tournament but it is a source of national anguish and humour — no British man has won the singles event at Wimbledon since Fred Perry in 1936, and no British woman since Virginia Wade in 1977. The Championship was first televised in 1937. For the fans who do attend, it is customary to nosh on strawberries and cream.