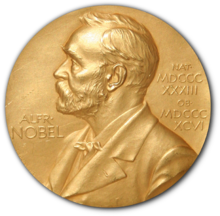 What kind of award is it?
This is a trick question, actually – aside from a cash prize, Nobel Prize winners are awarded both a medal AND a diploma for their extraordinary achievement. The diploma is handed to winners personally by either the King of Sweden or, just for the Nobel Peace Prize, by the Chairman of the Norwegian Nobel Committee. As if that isn’t honorific enough, each diploma is hand-designed for the laureates who have won it, containing a related picture, title, and a description of the reason the award was received (except in the case of Peace Prize winners). END_OF_DOCUMENT_TOKEN_TO_BE_REPLACED

Not every trophy is shiny, metal and mantle-ready! We’re straying a bit off the beaten path with this one, but the Green Jacket is such an important symbol of achievement in the sports world that we just had to include it. Awarded to the winner of the Master’s Tournament, this garment represents the most coveted title in golf. It’s got an interesting history, too – read on to find out more about this revered prize!

The Green Jacket got its start as a garment worn by members of the Augusta National in 1933, who were given the bright coat so as to stand out as a source of information for visitors to their event. Originally made out of wool (despite the event taking place in Georgia, in spring – not necessarily the season for an overcoat), the jackets were once crafted in America, from American materials and by American craftsmen, but since 1996 are made by a famous British tailor. The first proper champion’s jacket wasn’t awarded until 1949, but all prior champions dating back to the first event in 1933 were given jackets retroactively. END_OF_DOCUMENT_TOKEN_TO_BE_REPLACED