During the 2017-18 NBA season, the Philadelphia 76ers were hoping to show that they were a squad with loads of talent and a knack for winning. They proved this by making it to the conference semifinals; however, the unceremonious departure at the hands of the Boston Celtics confirmed that there is still room for improvement.

Here at Spike’s Trophies, we may be known for our customized awards and trophies for people in NJ, PA, and DE; but we also know a thing or two about “trusting the process” and the up-and-coming Philadelphia 76ers. Check out our preview of the 2018-19 season and who we think has the potential to make a name for themselves this year.

2018-19: The Season of Opportunity in Philly
Most of the 76ers roster from last year will be returning, which allows for the integrity of the team to remain the same. Everybody knows who the stars of the team are. Joel Embiid and Ben Simmons, as projected, are the two centerpieces of the organization. Guys like Dario Saric and Robert Covington will once again play key contributing roles, while the elite shooting of JJ Redick and toughness of TJ McConnell help the Sixers close out big games.

After these players though, there are some serious question marks left for this team. Let’s take a look at five players who could rise to the occasion and be the next breakout star.

5. Mike Muscala
The Sixers need all the shooting help off the bench they can get. This was extremely evident during the playoff series with Boston. Mike Muscala comes to Philly as part of a three-team deal involving Atlanta and OKC and could be of assistance. Standing 6-foot-11-inches tall, Muscala can play the four or five and become a versatile player in the Sixers lineup.

4. Furkan Korkmaz
Furkan also brings shooting skills to the Sixers, which they are desperately looking for off the bench. His silky, smooth release will allow him to earn quite a few minutes this season, but it’s his thin physique which makes him vulnerable on both sides of the ball.

3. Wilson Chandler
Averaging double-digit scoring every year besides his rookie year and one injury-plagued season where he only played eight games, veteran Wilson Chandler looks to become the team’s prominent scorer off the bench. While his jump shot isn’t his strong point, he is known for driving hard to the net and finishing around the rim.

2. Zhaire Smith
In true Sixer fashion, rookie Zhaire Smith is already injured. His foot fracture will leave him sidelined for who knows how long. From what he showed in college at Texas Tech, however, expect Smith to drive hard to the hoop while refusing to back down on defense.

1. Markelle Fultz
Everyone in Philadelphia and around the NBA is patiently awaiting the return of Markelle Fultz. Arguably the biggest x-factor in the Eastern Conference, Fultz showed in limited games that he can be one of the most dangerous offensive point guards in the game.

The 2018-19 season will show Philadelphia if they have what it takes to remain a contending team in the East and how their talented young nucleus can develop to take down the elite teams in the NBA.

Last season, the Flyers made the playoffs with one of the youngest rosters in the NHL. END_OF_DOCUMENT_TOKEN_TO_BE_REPLACED

The Philadelphia Eagles will begin the 2018 season as something they’ve never been before: reigning Super Bowl champions. After defeating the New England Patriots, led by the powerful duo of Tom Brady and Bill Belichick, 41 to 33 in Super Bowl LII in Minneapolis, the Eagles begin their journey of defending their title September 6th at home against the Atlanta Falcons.

With the kickoff to a new NFL season looming, let’s preview the 2018 Philadelphia Eagles and see if these one-time underdogs have what it takes to consistently contend and potentially repeat as champions.

When MVP-candidate and franchise quarterback, Carson Wentz, suffered a torn ACL in Week 14 against the Rams, the hopes of a deep postseason run hung in the balance for the Eagles. Coupled with the numerous other injuries they faced throughout the year, what followed was truly one of the most remarkable stories in sports about how backup QB Nick Foles led the Eagles to their first championship.

This upcoming season, the Week 1 availability of Wentz remains questionable. However, there is no denying that this is Carson Wentz’s team. When healthy, Wentz is a top-10 quarterback in the league. The intangible skills of leadership and confidence he possesses grant him the potential to be a star in this league for years. The Eagles return with a strong, and arguably the best, offensive line in football to protect their QB, and make way for running backs Jay Ajayi and Corey Clement.

The wide receiving corps is shaping up to look similar to the previous season, with the exception of Torrey Smith. Mike Wallace was brought in to fill that downfield speeder role, while Alshon Jeffery and Nelson Agholor look to continue to be big-time targets. Tight ends Zach Ertz and rookie Dallas Goedert give the Eagles an edge in the red zone with two 6’ 5” threats.

Their defensive front is as dominant as any in the entire NFL. With superstar players like Fletcher Cox and Brandon Graham, the emergence of 2017 1st-round pick Derek Barnett, and the new acquisition of Michael Bennett, any QB who is going up against the Eagles should be put on notice.

At the linebacker position, the Eagles have a solid group. However, the inability of Jordan Hicks to play a full season has hindered this position for the team. Nigel Bradham has played remarkably well and rightfully earned a five-year, $40 million contract.

The secondary is poised to be lockdown all season long. Most fans are looking forward to watching Sidney Jones get into the action after being sidelined while rehabbing from a torn Achilles. With talented corners in Jalen Mills and Ronald Darby, along with the hard-hitting safeties which include Malcolm Jenkins and Rodney Mcleod, the Eagles look just as strong this year on defense as they did during their championship run.

As the leading sports trophy store near NJ, we are predicting the 2018 Philadelphia Eagles to win the NFC East and return to the Super Bowl once again for a chance to repeat as champions.

When you are looking for a sports trophy in New Jersey or Pennsylvania, be sure to contact Spike’s Trophies at (215) 574-8100.

For a lot of us, our hard-earned trophies may be among our most treasured possessions. There’s a reason why some folks will designate one of the rooms in their home as their trophy room: The tokens showcased there symbolize the proud achievements and significant milestones in our lives.

Keeping that in mind, it makes sense to learn the basics of keeping your trophies clean and shiny. While materials like pewter and stainless steel are very low-maintenance, awards made of brass or silver often require a good buffing. 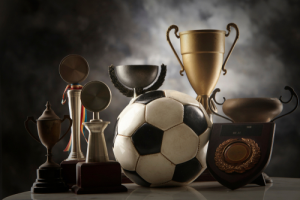 Rubbing an old NJ sports trophy with a tissue or your shirt sleeve can only get you so far. When it comes to your prized mementos, you should know how to really make them gleam.

As various materials call for different cleaning methods, we’re devoting this month’s blog to brass. Courtesy of the crew here at Spike’s, here are some tips for getting your brass trophies to shine.

Unsure if your memento is made from brass or another metal?

Pro-tip: If it is brass, magnets will not stick to it.

2. Get Your Materials Ready

Before you start, make sure you have:

Wearing your rubber gloves, thoroughly wash your trophy with one of the clean clothes and the soapy water. Though you don’t need to scrub the whole thing with the toothbrush, it does come in handy for reaching and brushing hard-to-reach edges and nooks.

With a new clean, dry cloth, gently rub the brass cleaner over the entire metal surface of the trophy.

Using your last remaining cloth, rub off all of the cleaner, and buff the brass with the dry cloth until you have a sparkling finish. But be careful; don’t touch the trophy with your bare hands until everything has completely dried.

Are you looking for beautiful and affordable New Jersey sports trophies to use for your community’s games and events? Spike’s Trophies can help you out. Contact us today to learn more by giving us a call at 855-652-4030.