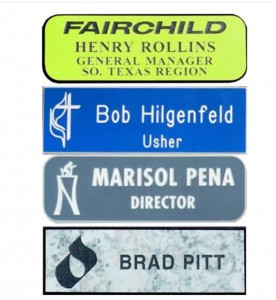 In a world that’s becoming increasingly impersonal and isolated, with people content to communicate only via email, text message or social media — and many times hiding behind pseudonyms or misleading profile pictures when they do — there’s one area where real face-to-face interaction still reigns supreme: business!

Spike’s Trophies understands business, because we’ve been in business for 90 years! Although we’ve continued to evolve along with technological advances and now reach customers nationwide via the internet, we still care about good old-fashioned values, like looking people in the eye and talking to them to find out what makes them tick.

Customers appreciate a personal approach. When they’re shopping for goods or services, they don’t want their only option to be dealing with a computer or a robot. Sometimes, it’s actually a lot easier and more pleasant to deal with humans! END_OF_DOCUMENT_TOKEN_TO_BE_REPLACED

If you’re anything like us here at Spike’s Trophies, you were extremely relieved when Major League Baseball’s All-Star break rolled around. As you might already know, your favorite purveyor of exceptional custom engraved plaques, trophies, awards and more is headquartered in Philadelphia, home to maybe the most frustrating team in the majors right now.

The Phillies absolutely needed a break after what turned into an infuriating first half, which involved a seemingly endless losing streak and the loss of first place — even second place — in the National League East. As eternal optimists who love our team, we can’t help but think they’ll eventually rebound in the second half and be the team we expected them to be at the start of the season.

On that gloriously sold-out Opening Day at Citizens Bank Park, where hundreds, maybe thousands, of fans donned Bryce Harper jerseys, who would’ve thought that J.T. Realmuto would’ve been the only Phillies player repping our city at the All-Star Game in Cleveland? END_OF_DOCUMENT_TOKEN_TO_BE_REPLACED