As much as the City of Brotherly Love is passionate about our sports teams, it’s apparent that Philadelphians play favorites. To be more specific, the city has always primarily focused on the Eagles and the Sixers above all else. Every now and then, the Phillies will steal the spotlight, such as in the late 2000s and early 2010s. But under very rare circumstances has Philadelphia ever been a hockey-centric town, with the Flyers falling at the bottom of the city’s four major sports teams. However, that has started to change over the recent weeks.

Going into the 2019-20 season, our expectations for the Sixers were through the roof. After all, they had acquired Al Horford and Josh Richardson, locked Tobias Harris and Ben Simmons into long-term contracts, and teams such as the Celtics and Raptors had lost key players. What people didn’t (but probably should have) predicted was another year of messy injury situations, with Joel Embiid missing time on and off all year and Simmons looking unlikely to return this season. What nobody saw coming, however, is how their lack of ability to compete on the road would derail a season where they’ve only lost two home games.

Despite some in-season surprises, such as the emergence of Shake Milton and a promising rookie season from Matisse Thybulle, this team looks like an easy out in the first round of the NBA playoffs, where they are currently projected to get the sixth seed. Fans are already looking forward to the end of the season, with hopes of Brett Brown’s firing and remaking the team’s core lineup. Luckily, the city has found another team to rally behind in the meantime. 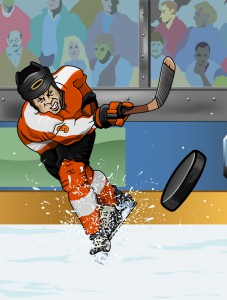 Nobody would have expected the Flyers to be where they are now. After multiple seasons of mediocrity, the Flyers now find themselves neck and neck with the defending-champion Washington Capitals for the Metro Division lead and are easily a top-5 team among the entire NHL. Much of this turnaround can be attributed to the addition of Kevin Hayes, Carter Hart taking a huge step forward in the net, and, most importantly, the arrival of first-year Flyers head coach Alain Vigneault.

In the eyes of this city, the Flyers have gone from perennial underachievers to Stanley Cup contenders in a matter of months. Because of this, the city has been paying much closer attention to what is now the best professional sports team in the city. Hockey was an afterthought for many radio personalities this time last year, but now sports radio is getting just as many calls about the Flyers as they would with the Sixers and Eagles.

It’s fair to wonder if the city’s rejuvenated love affair for hockey is a byproduct of the beloved Sixers falling well short of expectations. We might never know if this is the case. For now, it’s best to enjoy the ride and hope to see the Stanley Cup going to the Wells Fargo Center in a few months.

Whether the Cup does or does not come back to Philadelphia, you can still pick up a replica of this trophy at Spike’s Trophies. Yes, we have a replica in stock that can be personalized to the needs of any resident of the Delaware Valley and beyond. To learn more about the trophies and awards for NJ that are available at Spike’s, contact us today!