“Philly” (Philadelphia, Pa. USA) has a deep tradition in boxing. Being born and raised in Philly, we seem to have either adopted or been given the “Rocky” legacy. When visitors from all over the globe visit Philadelphia, their first point of interest to visit is to “run the Rocky steps”. Amazing! With all the American history and culture that exists in the city – a fictional character that was born in a 1976 (bicentennial year) movie – Rocky wins out? Why does this uplifting “one in a million” underdog who fights for and eventually wins a fictitious World Boxing Championship Belt strike such an emotional chord? I use the Rocky backdrop as an introductio to the story of this famous award, the Championship Belt. 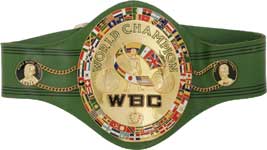 … in combat sports such as boxing, mixed martial arts and professional wrestling to signify the champions of the promotion or company, much like the Vince Lombardi Trophy or The Stanley Cup. This was not always the case. The history of this famous award started with boxing, much like the “Rocky” raw fisted struggle of human achievement and triumph.

History of the Belt
When was the tradition of awarding “Title Belts” started? Thomas “Tom” Cribb (the “Black Diamond”) was one of England’s most celebrated boxing champions in the early 1800’s. He made “milling on the retreat” acceptable as a mode of fighting. Upon his retirement in 1822, he was awarded a lion-skin championship belt, the first unofficial “title belt”. After retirement, Cribb maintained “The Union Arms” on Panton Street in Picadilly, London for many years, until he lost it in 1839. Cribb was inducted into the Ring Boxing Hall of Fame in 1954 and the International Boxing Hall of Fame in 1991.

When the modern authorities talk of the heavyweight championship of the world, they are probably referring to the championship belt presented to Sullivan in Boston on August 8, 1887. The belt was inscribed Presented to the Champion of Champions, John L. Sullivan, by the Citizens of the United States. Its centerpiece featured the flags of the US, Ireland, and the United Kingdom. The “Boston Bully,” Sullivan was the most famous sports figure of his day. To honor their hometown hero, Boston fans raised $10,000 for this elaborate trophy. Encrusted with 350 diamonds (now lost) and decorated with Sullivan’s portrait and crossed Irish and American flags, the gold-plated belt has this inscription: “Presented to the champion of champions by the people of the United States.” In 1983 the Smithsonian acquired Sullivan’s belt for its sports history collection. It is impossible to say who the “first” heavyweight champion was, since the sport of boxing goes back as far as recorded history and there have always been large fighters. Even in the bare-knuckle era, “champions” were plentiful.

A competing “officially recognized” Championship belt in boxing had its origins in London back in 1909 with the “Lonsdale Belt”. The belt is named after Lord Lonsdale who was patron of the National Sporting Club. The Earl of Lonsdale was a keen boxing fan who supported boxing for many years. The Lonsdale Belt was a boxing prize given by Hugh Lowther, 5th Earl of Lonsdale. It was originally presented to the champion in each British weight division and the holder could keep the belt if it was won and then defended two times. The belt was first won by Freddie Welsh in 1909 for winning the British lightweight title. Heavyweight Henry Cooper was the first person to win three Lonsdale Belts outright in his seventeen year professional career. 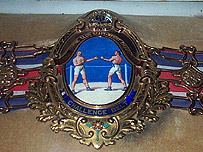 The belt is still won today and awarded by the British Boxing Board of Control although to keep it you must win and defend it three times. The belt is crafted from gold and porcelain and is therefore very expensive to produce.

The current Championship Belts awarded for boxing has its roots from The Ring (Ring Magazine -founded 1922) who began awarding championship belts in 1922. The first Ring belt was awarded to heavyweight champion Jack Dempsey, the second to flyweight champion Pancho Villa. The magazine stopped giving belts to world champions in the 1990s, but began again in 2002 when it launched its new championship policy intended to reward fighters who, by satisfying rigid criteria, can justify a claim as the true and only world champion in a given weight class. No other regularly-awarded belt (awarded to a champion upon becoming champion) prior to this one.

Champions maintain permanent possession of these belts even upon losing their title, with a new belt made when a new champion is crowned.

Designs
Generally, boxing has many fewer uniquely designed belts than wrestling. The 4 major boxing governing bodies generally use the same belt design for all their champions, whereas wrestling companies use different styles for each Championship. The WWE has had 11 different belts to represent their World Title, The National Wrestling Alliance has stayed with the same design for over 30 years, sans the period between 1986-1993 when the “Big Gold” belt was the NWA Worlds Heavyweight Title Belt. Beltmakers often create belts that not only set the Championships apart from the others, but become huge collector items as well.

These custom belts are generally made of Leather over-sized belts, with cast metal ornate belt buckles and or medallions. These belts are accented by numerous costume and real jewelry components to add to the presentation. The variations over the years are countless, with each being uniquely designed and manufactured.

Special thanks to wikopedia.com for contributing information.